Speculative execution mitigations have been discussed for some time, but most of the focus has been at the operating system level in order to adopt them in software stacks. What is happening at the firmware level? When it comes to applying these mitigations, how does the industry take advantage of them, and who coordinates their adoption specifically into the firmware? These are all good questions, but unfortunately no positive news can be shared.

The microarchitectural conditions complicate attack surfaces making them hard to mitigate in just one place. The different layers of the computer stack don’t have knowledge about active mitigations. As an example, the operating system doesn’t obtain information about active speculative execution mitigations like the branch target injection mitigation (retpoline) in System Management Mode (SMM) of UEFI firmware.

The problem is that the main CPU cores may use branch predictors other than the Return Stack Buffer (RSB) when the RSB underflows. Basically, RSB predict the target of RET instructions but when RSB underflows happen some of the CPU cores could fall back to using other branch predictors. This may impact software using the retpoline mitigation strategy on such processors. The best practice introduced by Intel in 2018 to address RSB behavior in SMM runtime was to leverage CALL instructions before returning from SMM context to avoid interfering with non-SMM usage of the retpoline mitigations. Regardless of whether Windows and Linux operating systems retpoline or not, if the SMM (SMI handlers) in system firmware don't have mitigations in place, an attack window will be available by design.

The impact of such attacks is focused on disclosing the content from privileged memory (including protected by virtualization technologies) to obtain sensitive data from processes running on the same processor (CPU). Cloud environments can have a greater impact when a physical server can be shared by multiple users or legal entities.

The following table contains the results of the analysis showing the vendor platforms without the Intel EDKII patch after the 2018-08-15 release date.

Table 1: Number of firmware per vendor without EDKII patch (Stuff RSB before RSM)

The following table contains the results of the analysis showing the vendor platforms with EDK II RSB patch but with at least one unprotected RSM present.

Table 2: Number of firmware per vendor with EDKII RSB patch but unprotected RSM is present. 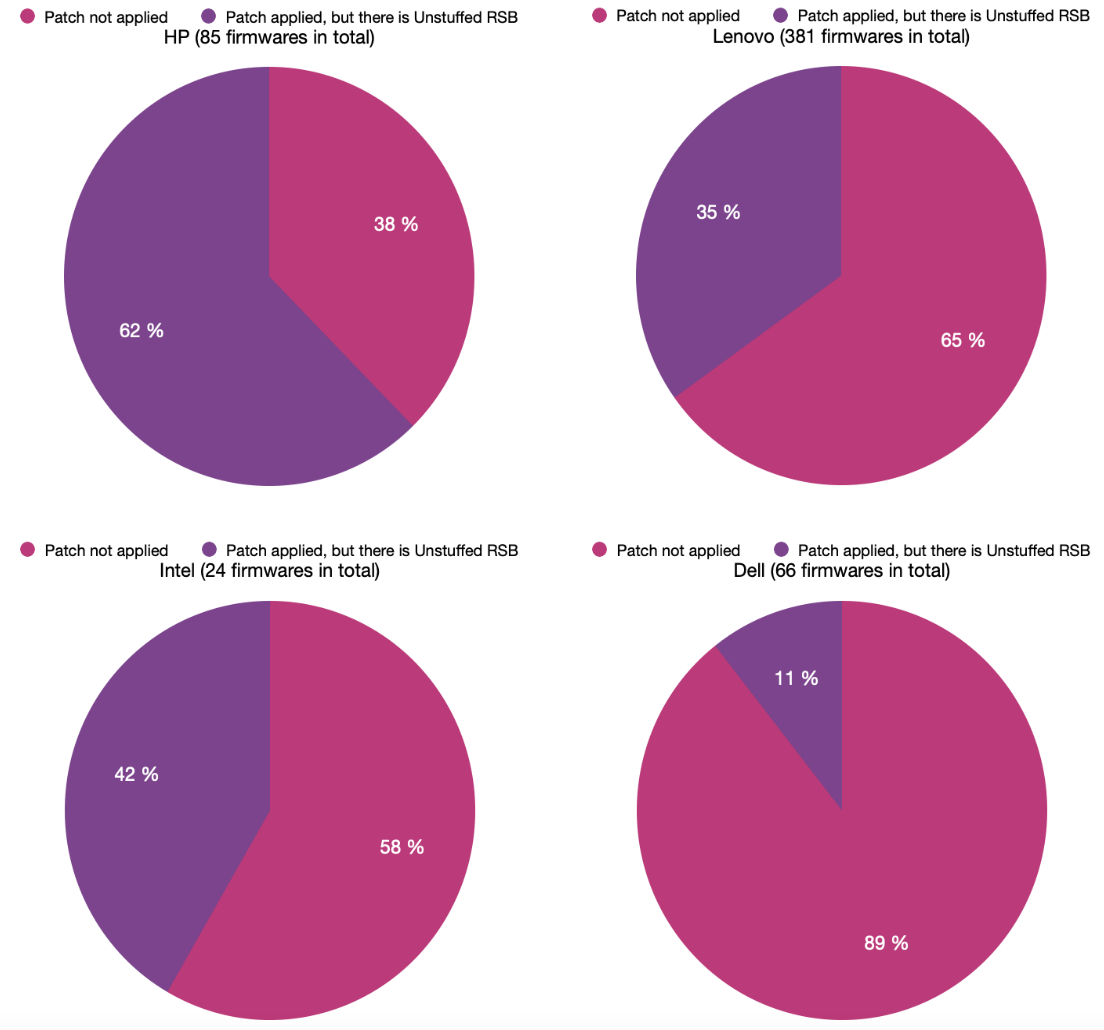 In our FirmwareBleed Github repository, one can find the complete results of the processed dataset from LVFS consisting of released public firmware and additional data for validation and further research.

The inconsistency in applying mitigations indicates a failure in the firmware supply chain when reference code from Intel and AMD contains mitigations but device vendors have not adopted them as intended. It is difficult to detect such supply chain failures without a deep code inspection at the binary level. In order to benefit our customers, Binarly's team invested a lot of time and effort to develop a comprehensive binary analysis infrastructure.

An in-depth look at RSB failures

The original patch with mitigation code has been pushed by Intel to EDKII github repository in August 2018 to UefiCpuPkg/PiSmmCpuDxeSmm module to mitigate CVE-2017-5715 by adding Return Stack Buffer stuffing logic before returning from SMM. After the stuffing, RSB entries should contain a trap like:

On AMD and Intel processors based on EDKII system firmwares, the same mitigation logic applies and the same mistakes in implementation too.

As an example, most of the analyzed UEFI firmwares images (most recent versions) have multiple cases when Resume from SMM (RSM) in SmiEntry is not mitigated. In the code of the PiSmmCpuDxeSmm there are three RSM instructions and two RSB stuffing mitigations. However, the third one does not. Additionally, the first two (where RSB stuffing is present) are not used during exit from SMM. The following figure shows the correct applied RSB stuffing mitigation (StuffRsb EDKII macros): 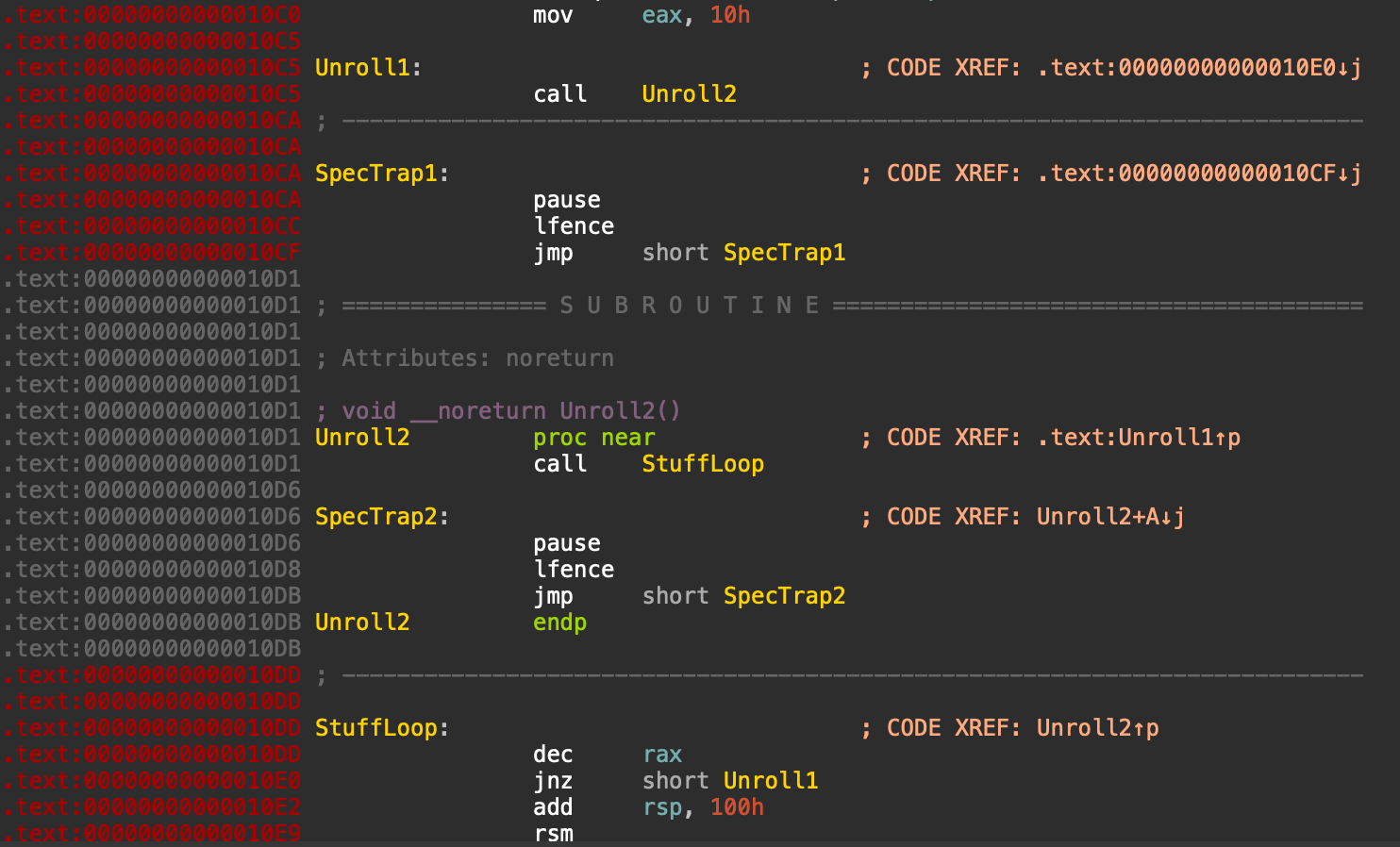 On the other hand, during our research we found places where RSB mitigations are missed before the RSM instruction is executed in SmiEntry routine (entry point to SMI handler calls).

On Intel-powered platforms, we also found alternate code patterns. We can see similar code to SmiEntry from EDKII without RSB stuffing like in the following figure: 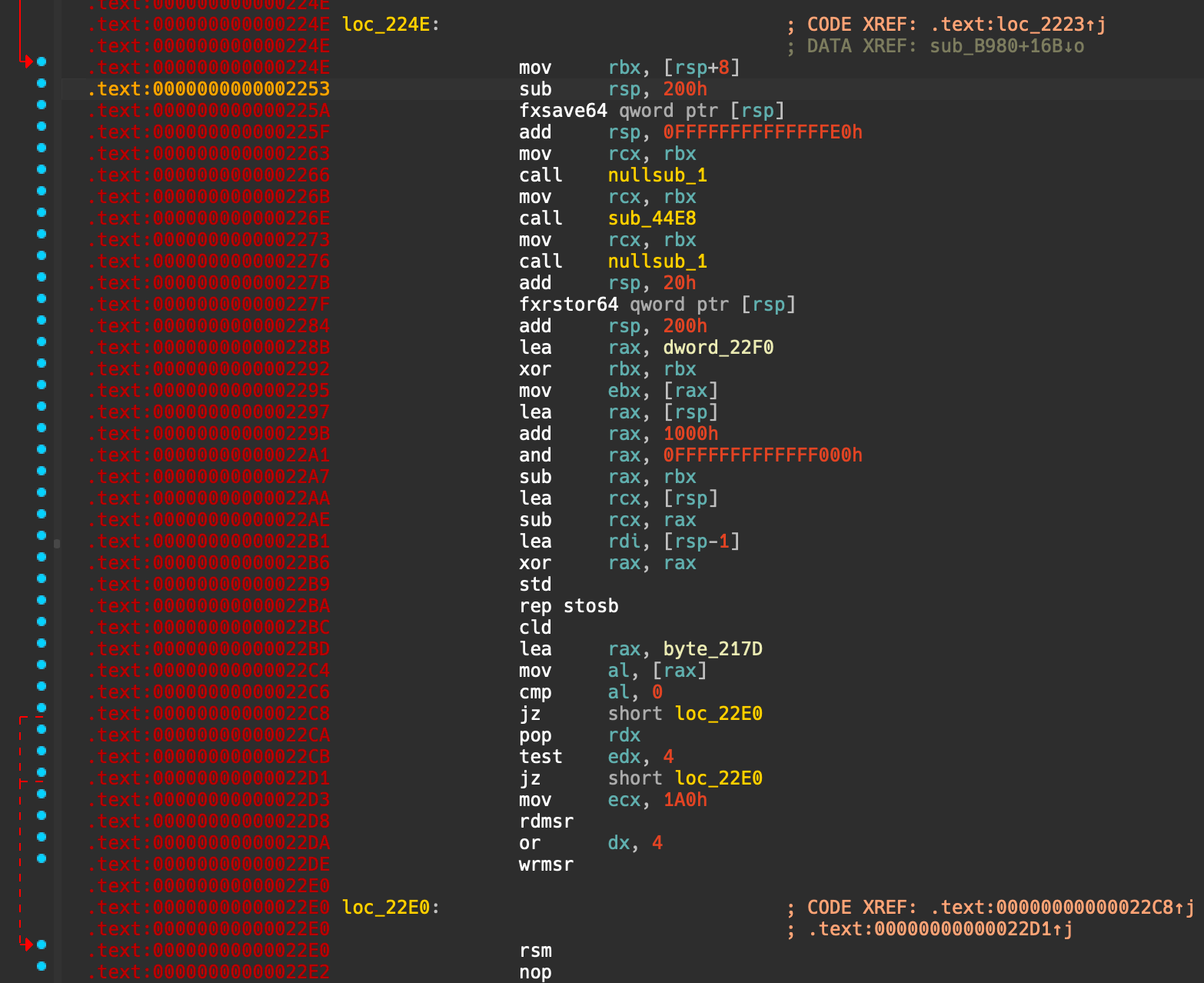 Applying the RSB stuffing mitigation incorrectly can lead to the following security issues:

With the release of Retbleed, we have seen increased interest in speculative execution bypasses. We decided to use Binarly internal deep code analysis infrastructure to apply new security checks related to mitigations like RSB into the firmware. The main reason was the hypothesis we want to prove the system firmware doesn’t introduce any inconsistency in Specter-like (RSB) mitigations.

In our experimental environment, we aimed to achieve a few goals: 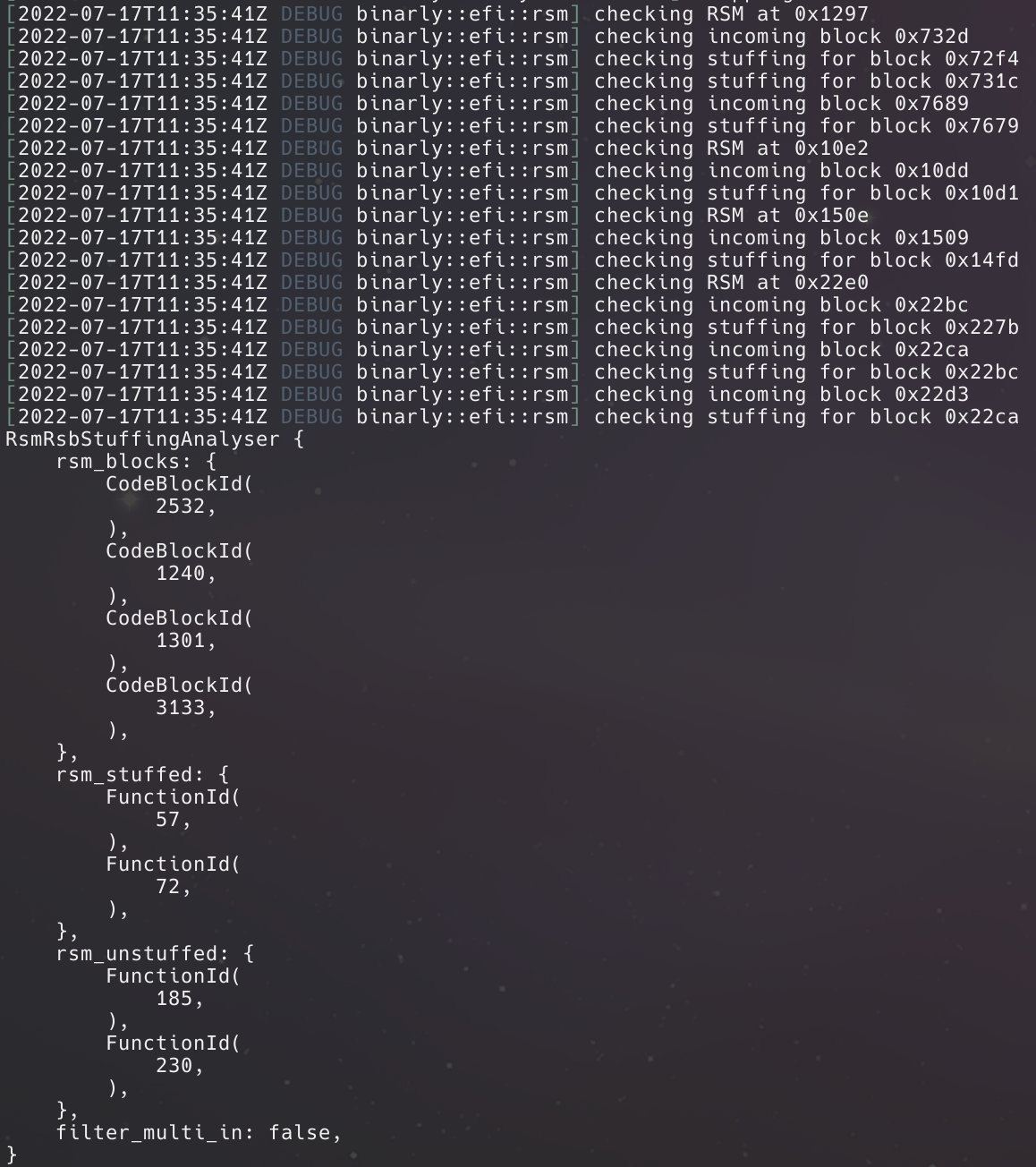 The figure shows the output from the Binarly's code analysis infrastructure where all the code places with RSM instructions are used on certain SMM modules and all the RSB stuffing mitigations are applied.

During our analysis we detected two common patterns for unprotected RSM instructions:

Based on these discoveries, we developed the FwHunt rule to effectively detect the different variants of the problem for multiple vendors.

A FwHunt rule was developed during our research to detect two types of problems:

All detection cases previously mentioned are covered by the FwHunt rule:

The result of the applying FwHunt rule with open-sourced fwhunt-scan (community version of our scanner):

Figure 6: Results of the analysis from fwhunt-scan 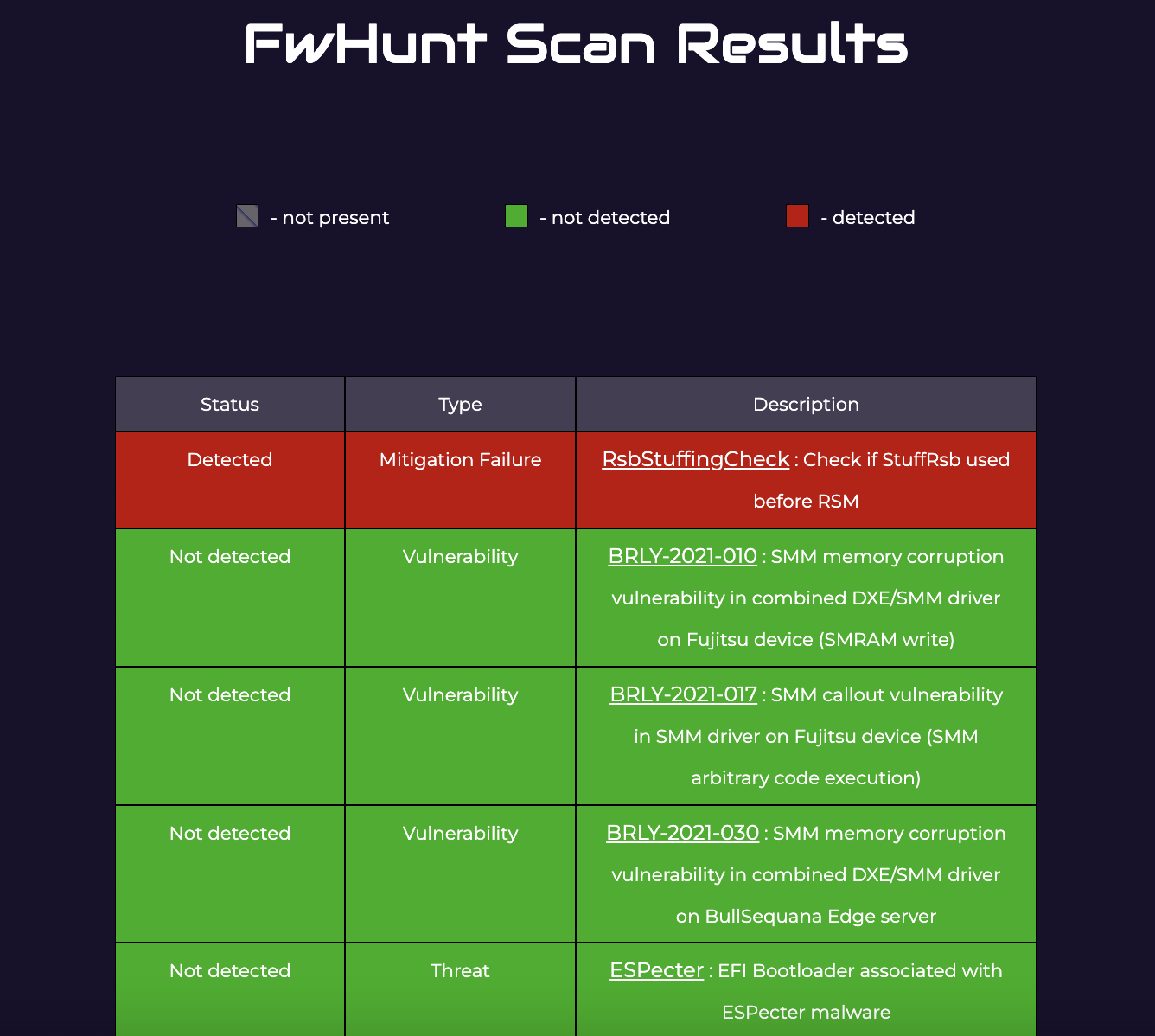 Figure 7: Results of the analysis from FwHunt.RUN

We proved in our research that even if a mitigation is present in the firmware, it doesn't mean it is applied correctly without creating security holes. It has been demonstrated again by FirmwareBleed that source code static analysis tools are constantly failing to detect misuse of runtime protections and mitigations. The research also demonstrates the power of binary-level analysis and the effectiveness of such an approach to detect FirmwareBleed at scale.

There will always be security gaps if additional validation is not enforced at the binary level, which can put even recently released hardware at risk. Developing secure firmware requires trust and confidence, but security cannot be guaranteed without validation.